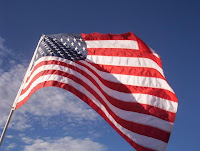 What do we do about people who want to burn the American flag? Those folks who want to stomp all over it, or spit on it to make some sort of "statement." Some say the first Amendment gives us the right to desecrate the American flag. Others want to make it illegal. This is a tough one. What should we do? I can solve this one easily. I believe we should have a simple requirement. Let flag desecration be legal, but you have to have three sponsors who will give you written permission. Those sponsors should be from a panel of experts who might be considered "qualified" to give such permission.

First, you need a signature of a war veteran. How about a Marine who fought at Iwo Jima?

The men who raised that flag over Iwo Jima did so on the bodies of thousands of dead Americans, who gave their lives so a few could raise the flag in defiant claim of that last island in a long, bloody march to defeat the Japanese. What did those Marines think about the flag as they watched their comrades get slaughtered? Every battle with the Japanese was horrific. Each day meant half of everyone you knew would be dead tomorrow. Your own future was a coin flip away from a bloody death in a place your family couldn't pronounce. Or you could ask a Vietnam vet who spent years in a POW prison, tortured in small, filthy cells unfit for a dog. Or Korean War soldiers who rescued half a nation from communism, or the Desert Storm warriors who repulsed a bloody dictator from raping and pillaging an innocent country, to find people from a foreign land kiss our flag as we drove through their streets.

To every American soldier who ever fought for the United States, that flag represented your mother and father, your sister and brother, your friends, neighbors, your fellow countrymen.In fact it stands for your freedom, guaranteed by your nation. Those who fought, fought for that flag.Those who died, died for that flag. I wonder what they would say if someone asked their permission to burn a flag?

Next, you need a signature of an immigrant. Preferably one who left their family behind. Their brothers and sisters languish in their native land, often subject to tyranny, poverty and failure, while America offers freedom and prosperity.

Some have seen friends and family be tortured and murdered by their own government for daring to do many things we take for granted every day.Many give their lives in the struggle just to touch our shores, even as America turns its back and returns them to face persecution once again in their native land. For those who risked everything simply for the chance to become an American, what kind of feelings do they have for the flag when they pledge allegiance to it for the first time? Go to a naturalization ceremony and see for yourself, the tears of pride, the thanks, the love and respect of this nation, as they finally embrace the flag of our nation as their own. Then, walk up and ask one of them if it would be OK to spit on the flag.

Last, you need a signature from someone living in a foreign land who cannot get here. Say, Rwanda. Or maybe Bosnia. Maybe even Haiti. You might have to move fast, as they flee oppressors who attack them with machete's or shoot at them randomly in a marketplace. I'm sure they will never question your sanity as they duck for cover.

The writers of the Declaration of Independence are long gone. I wonder what they thought of the American flag as they drafted that document? They knew such an act would drag the nation into war with England, the greatest power on earth. Did the flag mean anything to them?

They knew failure of independence meant more than just a disappointment. It meant a noose would be snugly stretched around their necks. I wonder how they'd feel if someone asked their permission to toss the flag in a mud puddle?

And then, please ask permission from those who died wishing they could, just once... or once again... see, touch or kiss the flag that stands for our nation, the United States of America... the greatest nation on earth.

I would offer another - anyone who has ever received a burial flag, "On behalf of a grateful nation"

This is one of my favorites. I'm glad you posted it here. I hope others take it to heart and share it as well.