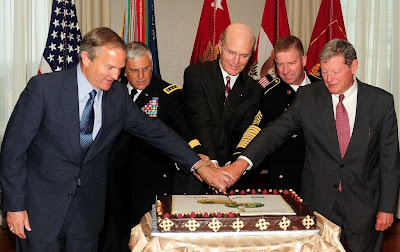 Two hundred and thirty-three years ago, the United States Army was established to defend our Nation. From the Revolutionary War to the Global War on Terror, our Soldiers remain Army Strong with a deep commitment to our core values and beliefs. This 233rd birthday commemorates America’s Army – Soldiers, Families and Civilians – who are achieving a level of excellence that is truly Army Strong both here and abroad. Their willingness to sacrifice to build a better future for others and to preserve our way of life is without a doubt, the Strength of our Nation.


Read the Chairman of the Joint Chiefs of Staff Birthday Message

Army and Congressional leaders celebrated the Army's 233rd birthday and the Army's partnership with Congress yesterday at a cake-cutting ceremony on Capitol Hill. Secretary of the Army Pete Geren told the audience it was a great occasion to celebrate an institution, a partnership that is older than the nation: "It was really an adoption more than a birth because Soldiers were in the field laying siege to the British in Boston when the Continental Congress decided to create an Army on June 14, 1775 -- they said, 'those guys in the field; they are our Army.'" From left to right: Rep. Chet Edwards of Texas, Chief of Staff of the Army Gen. George W. Casey Jr., Secretary Geren, Sgt. Maj. of the Army Kenneth O. Preston and Sen. James Inhofe of Oklahoma.

From all of us here at eMail Our Military to all of you, Hooah and a Very Happy Army Birthday!