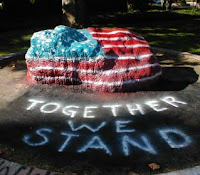 I am the flag of the United States of America

I fly atop the world's tallest buildings.
I stand watch in America's Halls of Justice.
I fly majestically over great institutions of learning.
I stand guard with the greatest military power in the world.
Look up and see me!
I stand for peace, honor, truth, and justice.
I stand for freedom. I am confident, I am arrogant, I am proud.
When I am flown with my banners, my head is a little higher, my colors a little truer,
I bow to no one!
I am recognized all over the world.
I am worshipped, I am loved, and I am feared!
I have fought in every battle of every war for more than 200 years:
Gettysburg, Shiloh, Appomattox, San Juan Hill, the trenches of France,
the Argonne Forest, Anzio, Rome, the beaches of Normandy,
Guam, Okinawa, Japan, Korea, Vietnam, the Persian Gulf,
and a score of places long forgotten by all, but those who were there with me...
I was there!
I led my Soldiers, Sailors, Airmen, and Marines.
I followed them and watched over them.
They loved me.
I was on a small hill in Iwo Jima.
I was dirty, battle-worn, and tired.
But my Soldiers cheered me!
And I was proud!
I have been soiled, burned, torn, and trampled
on the streets of countries that I have helped set free.
It does not hurt, for I am invincible.
I have also been soiled, burned, torn, and trampled
on the streets of my own country and,
when it is by those whom I have served with in battle-it hurts.
But I shall overcome, for I am strong!
I have slipped the bonds of Earth and,
from my vantage point on the Moon,
I stand watch over the uncharted new frontiers of Space.
I have been a silent witness to all of America's finest hours.
But my finest hour comes when I am torn in strips to be used as bandages
for my wounded comrades on the field of battle
when I fly at half-mast to honor my Soldiers, Sailors, Airmen, and Marines,
and when I lie in the trembling arms of a grieving mother,
at the gravesite of her fallen son or daughter I am proud.
My name is Old Glory-long may I wave.
Dear God, long may I wave.