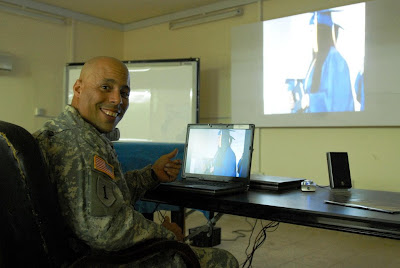 Army Sgt. Elias Lantigua, of Headquarters and Headquarters Company, Task Force 12, Camp Taji, Iraq, smiles as his daughter, Micaela, takes the stage during her graduation ceremony June 7, 2008, in Ansbach, Germany. Lantigua was one of a few soldiers in 12th Combat Aviation Brigade who had an opportunity to see the ceremonies via streaming video on the Internet.