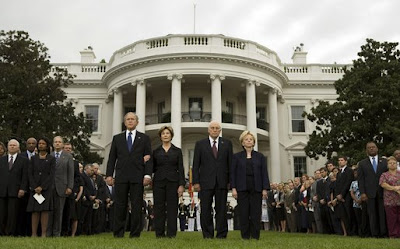 A Proclamation by the President of the United States of America

September 11, 2001, was etched into America's memory when 19 terrorists attacked us with barbarity unequaled in our history. On Patriot Day, we cherish the memory of the thousands of innocent victims lost, extend our thoughts and prayers to their families, and honor the heroic men and women who risked and sacrificed their lives so others might survive.

Since 9/11, we have recognized the threat posed by terrorists to the safety of the American people and worked to protect our homeland by fighting terrorists abroad. We are confronting terrorism by advancing freedom, liberty, and prosperity as an alternative to the ideologies of hatred and repression. Our Nation pays tribute to our courageous men and women in uniform serving around the world and the devoted members of our law enforcement, public safety, and intelligence communities at home who work night and day to protect us from harm and preserve the freedom of this great Nation.

Seven years ago, ordinary citizens rose to the challenge, united in prayer, and responded with extraordinary acts of courage, with some giving their lives for the country they loved. On Patriot Day, we remember all those who were taken from us in an instant and seek their lasting memorial in a safer and more hopeful world. We must not allow our resolve to be weakened by the passage of time. We will meet the test that history has given us and continue to fight to rid the world of terrorism and promote liberty around the globe.

NOW, THEREFORE, I, GEORGE W. BUSH, President of the United States of America, do hereby proclaim September 11, 2008, as Patriot Day. I call upon the Governors of the United States and the Commonwealth of Puerto Rico, as well as appropriate officials of all units of government, to direct that the flag be flown at half-staff on Patriot Day. I also call upon the people of the United States to observe Patriot Day with appropriate ceremonies, activities, and remembrance services, to display the flag at half-staff from their homes on that day, and to observe a moment of silence beginning at 8:46 a.m. eastern daylight time to honor the innocent Americans and people from around the world who lost their lives as a result of the terrorist attacks of September 11, 2001.

IN WITNESS WHEREOF, I have hereunto set my hand this eighth day of September, in the year of our Lord two thousand eight, and of the Independence of the United States of America the two hundred and thirty-third.