Sailors Man the Rails of the USS George Washington 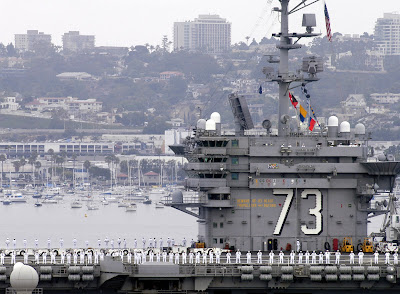 Wow, I was on the USS Independence in Yokosuka and rode it home in '98, passed on the 'don't tread on my' flag to the 'hawk and everything. Now the Kitty Hawk is coming home, probaly going to Bremerton, WA with the Indy. 10 years just doesn't seem that long ago. To those on the 'hawk enjoy decomm. and to those on the GW enjoy Japan, it's a blast, you'll love it.

Fantastic photo! Seeing this in person is even more amazing.

This is my sons ship :-) I am so proud of this Navy, my son and this ship. I am also very very proud of the USS Kitty Hawk and will miss it sailing the seas under the US Flag!

:-) thanks for posting this photo.