26th MEU Rings in the New Year in Kuwait 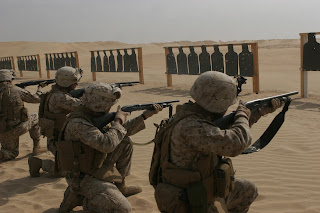 The Marines and sailors debarked from the ships of the Iwo Jima Strike group aboard Landing Crafts, Air Cushioned during the past four days, bringing nearly all MEU Marines and equipment with them. Previous deployed exercises featured various parts of the nearly 2,300 Marine-strong unit.

The troops will take advantage of the extensive ranges available near Beuhring to conduct exercises impossible aboard naval vessels, such as mortar and artillery fires, Military Operations in Urban Terrain, and vehicle and tank live-fires.

The MEU’s aircraft will refine and practice attack and support roles at the ranges and airfields through live fire and other exercises such as external lift-carrying, carried out in conjunction with the logistics and infantry Marines.

During the training the MEU will continue to maintain the high state of readiness it carries as the rapid reaction force for the Middle East.

The 26th MEU deployed in late August, 2008, aboard the ships of the Iwo Jima Strike Group in support of the Global War on Terror.