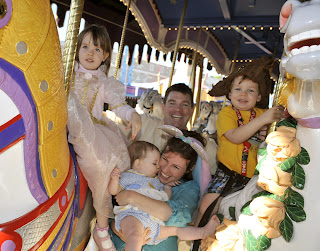 “For so many of the men and women who serve in our U.S. military, time together with their families is cause enough for celebration,” said Jay Rasulo, chairman of Walt Disney Parks and Resorts. “We are grateful for their service and hope ‘Disney’s Armed Forces Salute’ will allow our troops to create wonderful, magical memories with their family and friends.”

Shades of Green, a resort hotel on Walt Disney World Resort in Orlando, Fla., is open exclusively to servicemembers, retirees, defense civilians, and their families. It is a safe haven for military families whether they’re reintegrating after an overseas deployment, having one last “family fling” before mom or dad deploys, or simply getting away for a weekend.

“If I suddenly break down and cry in a Holiday Inn, everyone’s going to be looking at me funny,” one guest recently explained. “Here, if it suddenly dawns on me he’s leaving in a week and I start to cry, I’ve got 10 people asking how they can help and offering support.”

The resort manager, Brian Japak, is a retired soldier, and his son has survived two roadside-bomb attacks while serving in Iraq.

“I have great empathy for the families that we serve here,” he said.

Japak said the staff makes every effort to ensure the guests are pampered Disney style -- with just a touch of “home” through the tax-free Army and Air Force Exchange Service shoppette and a Mickey Mouse statue decked out in red, white and blue. Security at the hotel complies with standard base force protection regulations, ensuring the soldiers and families can sleep soundly and not worry about their personal safety.

Shades of Green is an Armed Forces Recreation Center hotel run by the Army’s Family and Morale, Welfare and Recreation Command based in Alexandria, Va. The command’s mission is to provide soldiers and their families with the same quality of life they are sworn to protect. Rates are set on a sliding scale, based on rank, and with no shareholders to answer to or profits to be made, the rates are kept remarkably low.

At the Walt Disney World Resort in Florida, from Jan. 4 to Dec. 23, each active or retired member of the U.S. military may obtain one free five-day "Disney's Armed Forces Salute" ticket with “Park Hopper” and water park options. The ticket is valid for five days of admission into the four Walt Disney World theme parks, plus a total of five visits to a choice of a Disney water park, DisneyQuest Indoor Interactive Theme Park or certain other attractions.

During this offer period, active or retired U.S. military personnel also may make a one-time purchase up to five "Disney's Armed Forces Salute Companion" tickets – good for five days -- for $99 each, plus tax, for family members or friends. Although this ticket for family members and friends does not include either the Park Hopper or Water Park Fun & More options, it can be upgraded to add either such option, or both, for an additional $25, plus tax, per option. All tickets and options are nontransferable and must be used by Dec. 23.

A similar offer is in place at Walt Disney Land in California. More information is available at installation ITT/ITR offices.