Purple Heart Is Ruled Out for Traumatic Stress

By LIZETTE ALVAREZ and ERIK ECKHOLM
Published: January 7, 2009 in the New York Times 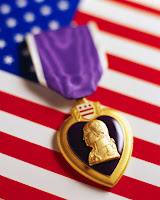 The Pentagon has decided that it will not award the Purple Heart, the hallowed medal given to those wounded or killed by enemy action, to war veterans who suffer from post-traumatic stress disorder because it is not a physical wound.

The decision, made public on Tuesday, for now ends the hope of Iraq and Afghanistan veterans who have the condition and believed that the Purple Hearts could honor their sacrifice and help remove some of the stigma associated with the condition.

The disorder, which may go unrecognized for months or years, can include recurring nightmares, uncontrolled rage and, sometimes, severe depression and suicide. Soldiers grappling with PTSD are often unable to hold down jobs.

In May, Defense Secretary Robert M. Gates said awarding Purple Hearts to such service members was “clearly something that needs to be looked at,” after he toured a mental health center at Fort Bliss, Tex.

But a Pentagon advisory group decided against the award because, it said, the condition had not been intentionally caused by enemy action, like a bomb or bullet, and because it remained difficult to diagnose and quantify.

“Historically, the Purple Heart has never been awarded for mental disorders or psychological conditions resulting from witnessing or experiencing traumatic combat events,” said Eileen Lainez, a Pentagon spokeswoman. “Current medical knowledge and technologies do not establish PTSD as objectively and routinely as would be required for this award at this time.”

One in five service members, or at least 300,000, suffer from post-traumatic stress disorder or major depression, according to a Rand Corporation study in 2008.

or some soldiers suffering from the disorder, the historical distinction between blood and no blood in an injury fails to recognize the depths of their mental scars. A modern war — one fought without safe havens and with the benefit of improved armor — calls for a new definition of injuries, some veterans say.

Kevin Owsley, 47, who served in the Ohio National Guard in 2004 as a gunner on a Humvee and who is being treated for PTSD and traumatic brain injury, said he disagreed with the Pentagon’s ruling.

Unable to hold a job, Mr. Owsley supports his family on disability payments. This week he told his Veterans Affairs doctor he was fighting back suicidal impulses, something he has struggled with since his return. “You relive it every night and every day,” he said. “You dream about it. You can see it, taste it, see people getting killed constantly over and over.”

“It is a soldier’s injury,” he said, angrily, in a telephone interview on Wednesday.

But many soldiers do not feel that way. In online debates and interviews they expressed concern that the Purple Heart would be awarded to soldiers who faked symptoms to avoid combat or receive a higher disability rating from the Department of Veterans Affairs.

“I’m glad they finally got something right,” said Jeremy Rausch, an Army staff sergeant who saw some of the Iraq War’s fiercest fighting in Adhamiya in 2006 and 2007. “PTSD can be serious, but there is absolutely no way to prove that someone truly is suffering from it or faking it.”

The Purple Heart in its modern form was established by Gen. Douglas MacArthur in 1932. Some 1.7 million service members have received the medal, and, as of last August, 2,743 service members who served in Afghanistan and 33,923 who fought in Iraq had received the award.

The medal entitles veterans to enhanced benefits, including exemptions from co-payments for veterans hospital and outpatient care and gives them higher priority in scheduling appointments.

The Pentagon left open the possibility that it could revisit the issue.

But a Pentagon-supported service group, the Military Order of the Purple Heart, has strongly opposed expanding the definition to include psychological symptoms, saying it would “debase” the honor.

“Would you award it to anyone who suffered the effects of chemicals or for other diseases and illnesses?” John E. Bircher III, director of public relations for the group, said Wednesday. “How far do you want to take it?”

Post-traumatic stress disorder was first identified during the Vietnam War and has gradually been accepted as a serious psychological problem for some who experience violence and fear.

Dr. Barbara V. Romberg, a psychologist in Bethesda, Md., and founder of Give an Hour, which offers mental health services to troops and their families, said that she and many other psychologists believed the discussion of Purple Hearts had brought more attention to post-traumatic stress disorder and the seriousness of psychological wounds suffered on the battlefield.

“We’re working to normalize post-traumatic stress as an understandable human consequence of war that can result in very serious damage to some people’s lives, and they deserve honoring for that,” she said.

“But I don’t want to be so quick to condemn the decision,” she added.

Many have post-traumatic stress, but only some develop a serious lasting disorder; in both cases, she said, “people deserve to be honored in some way for the injury they received in combat.”

After years of criticism for ignoring the problem, the Defense Department and the Veterans Administration have bolstered their capacity to diagnose and treat PTSD, and those with serious cases may receive substantial disability benefits. Some of those suffering from severe traumatic brain injuries qualify for a Purple Heart because they required medical treatment.

But in its decision not to extend Purple Hearts to PTSD sufferers, first reported Tuesday by Stars and Stripes, the Pentagon said part of the problem stemmed from the difficulty in objectively diagnosing the disorder.

That decision was made in November. It was not clear why the Pentagon did not announce the decision then.

There have been recent changes in awarding Purple Hearts. The criteria was expanded in 2008 to include all prisoners of war who died in captivity, including those who were tortured. “There were wounds there,” Mr. Bircher said.

“You have to had shed blood by an instrument of war at the hands of the enemy of the United States,” he said. “Shedding blood is the objective.”

I am very sympathetic to those who suffer this terrible disorder and hope you will acknowledge that the Military and the VA are fully aware of its effects and are offering treatment.

The criteria for this particular medal, however, is the suffering of physical wounds on the battlefield as the result of combat action by the enemies of the United States. There are many other kinds of injuries on the battlefield -- someone can have a leg crushed by a vehicle, you can be injured by friendly fire, you could be exposed to chemical or biological agents, you can even contract a life-long disease. After Vietnam, for example, those soldiers exposed to Agent Orange are now suffering from many diseases, including Diabetes. After the first Gulf war, many suffer from “Gulf War Syndrome.” Where do you draw the line? Moreover, PTSD is a treatable disease -- loss of a limb, or any combat wound for that matter, is permanent. And, what about those who feign the illness just to receive VA medical treatment; or, what about a group who witnesses a battlefield trauma together, but only one or two suffer from PTSD; should they all receive the Purple Heart?

Just for the record, this is not a new phenomenon, it just has a new name. Soldiers have suffered from "Shell Shock", "Combat Fatigue", and other symptoms since the beginning of warfare.

Since its inception in 1932, this Medal honors those who have spilled their blood or given their lives in the defense of their country. Expanding that criteria only denigrates its honor and those who wear it proudly.

I am torn with this discussion. I am an ex-solider but from the British forces. We do not award medals for wounds received, physical or mental. Getting wounded in combat is part of the job - that is what you are paid for.
However, I am also a sufferer of PTSD though back when I was first diagnosed in the early 90's it was even less recognized. I therefore sympathize with the sufferers of it. However, it must be recognized that PTSD is not limited to those in combat, as combat wounds are. Firefighters, Police, EMS workers have all suffered from it - they receive no medals for it either. So I have to agree with the Pentagon ruling. Though I still question the awarding of medals for receiving wounds in the first place.

As a Veteran, this is a "no-brainer".

The Purple Heart should never be given to those with PTSD. It would devalue what the award was originally created for.

Plus, they would have to automatically give it to all military personnel who were in areas of fighting over the years. WW1 to Vietnam and now Iraq & Afganistan. I personally feel anyone in a combat zone received some manner of PTSD. Some just worse than others.

Perhaps they should create a special medal just for PTSD. I just wonder how many would be proud to display IT in place of the Purple Heart since everyone would know it was linked to a "mental disorder" and not a "wound received in combat".

Again .. Purple Heart should be only for physical wound received in combat.