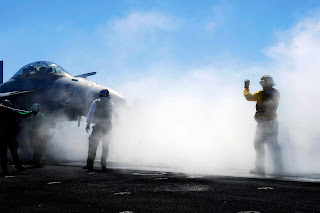 The deployment is part of the Navy's Fleet Response Plan (FRP), which is designed to allow the United States the ability to rapidly respond with flexible and sustainable force to any global commitment on short notice.

"Anytime we deploy, our primary mission is to standby and be ready to support the war on terror wherever that may be," said Stennis Commanding Officer Capt. Joseph Kuzmick. "Terrorism takes many forms around the world, and there are a couple of hot spots in the world right now that we might participate in actively."

JCSCSG plans to maintain the strike group's operational skill set and increase inter-operability with its allies through joint exercises.

"Some of it is just keeping up our skills and training, and we've got some enduring partnerships we're going to work on in that part of the world," said Kuzmick.

Another goal of this deployment is to foster diplomatic relations with U.S. allies and foreign nations in the region. Sailors from JCSCSG each play a role in this as they represent America positively through proper overseas conduct.

"I consider liberty a mission for the crew," said Kuzmick.

"When we pull into foreign countries, not only are we seeing their country but they are seeing us. They can see we are real people, and they can see we are kind people. It makes a positive impression that sometimes does not come through the other visibility and media sources they have."

The deployment is scheduled to be approximately six months; however, JCSCSG will be prepared respond to the needs of any operational situation.

"We are not going to stick to that if conditions dictate otherwise," said Kuzmick. "When you send an aircraft carrier across the Pacific Ocean, it's a fairly large commitment. You're going to spend some time over there since you made the effort to go over there."

During the past few months, Stennis conducted several training exercises off the southern coast of California and is fully prepared to deploy in support of the FRP. This deployment is part of America's maritime strategy under the FRP to maintain a force of combat power overseas, capable of protecting America's vital interests, and assuring regional stability.