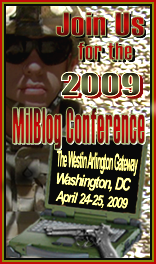 This year's MilBlogging Conference will take place at The Westin Arlington Gateway on April 24-25. A block of rooms has been reserved for attendees and if you'd like to be there too, you can reserve your room by clicking here.

The registration fee is $50 per person and includes dinner, breakfast and entry to the conference.

This year's conference will feature an eclectic mix of milbloggers who will address some very interesting topics. An extra hour has been added to the Saturday's schedule so that one more panel could be included. Below are the panels for the 2009 MilBlog Conference. Speakers will be announced as soon as they have been confirmed.

Strategy Session: A discussion on military strategy by some of the most prominent thinkers in the milblogging community. Is the War in Iraq won? If so, what now? What about Afghanistan? Plus, thoughts on the way forward in both regions with a new administration in place.

Beyond MilBlogging: Taking the blog to the next level. From book deals to paid writing assignments, documentaries, speaking engagements, television and radio appearances and much, much more, many milbloggers have been able to branch out beyond the blog. We’ll find out how a few of them did it, and what projects they have in the works.

TENTATIVE: The View From the Top: More on this panel later.

Taking Care of Our Veterans: What are the most pressing issues currently facing our veterans, and how will the policy debate be framed in 2009? Speaking of policy, what can we expect from General Shinseki and the new administration with respect to veterans issues?

Back to Our Roots: Some say the “Golden Age” of milblogging has passed. The age when milbloggers were a small, tight community and when bloggers on the front-lines and parents/spouses on the homefront were widely read throughout the blogosphere. Today, there are so many interesting milblogs which are not widely known. We'll meet some milbloggers you may or may not have heard of and get back to the finest tradition of milblogging - celebrating and highlighting the diversity of voices within our community.

*The milblogger meeting will be an informal, voluntary meeting to discuss items of interest to milbloggers. Among the items we'll be discussing are how we can help raise money for troop charities, help veterans and families in need and better work together on various issues now that the community has become so large.

Will you be attending this year's MilBlogging Conference? If so, leave a comment. We'd love to meet you live and in person!

Connect with eMail Our Military on twitter at: @MailOurMilitary or follow the blog feed at: @eMOMs. If you're reading this via email or in your feed reader, stop by and add your comments.