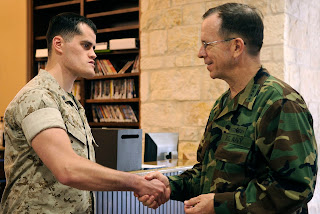 FORT SAM HOUSTON, Texas, April 20, 2009 – Suicide rates, operational tempo and homeless veterans were some of the topics facing the chairman of the Joint Chiefs of Staff during a news conference following a visit with wounded soldiers and their families at Brooke Army Medical Center here April 17.

Navy Adm. Mike Mullen, along with U.S. Sen. John Cornyn and U.S. Rep. Henry Cuellar, both of Texas, spoke to reporters following visits to the burn unit at BAMC, as well as to the Center for the Intrepid, the state-of-the-art rehabilitation center adjacent to the hospital.

The group met reporters following a visit to the new Warrior and Family Support Center, a 12,000 square-foot, $5 million facility opened Dec. 1, 2008, for injured servicemembers and their families.

“Brooke Army Medical Center is state-of-the-art and is considered the gold standard for health care for our wounded warriors,” Cornyn said. “We’re proud of the services here and the healing afforded our wounded service members and their families.”

Cornyn stressed that the government has an obligation above simply keeping the nation safe.

Cuellar also stressed the importance of care for wounded warriors. “When the parades are over, the music stops, and the confetti stops hitting the ground,” he said, “we look at the care we provide our men and women. That’s so important, and that’s why we’re here today.”

Mullen faced the questions of a rapid rise in suicides within the military, primarily in the Army, since 2006. He told reporters that the answers start at the top.

The chairman noted, however, that he was encouraged by a visit to Fort Hood, Texas, the day before.

"I was struck that there are 54,000 soldiers at Fort Hood, and there has been only one suicide since January,” he said. “As tragic as each one is, that’s a pretty remarkable number when you consider the number of soldiers who are there.”

But as bleak as the numbers are, Mullen said, he believes there is a solution.

But Mullen admitted that the services have been pressed hard during eight years of war and constant deployments.

Our stress levels are up, and we have to realize that stress is driving a lot of this, and we’ve got to look at ways to relieve that stress,” he said. “The first big step in taking care of our problem is acknowledging that you have one – and we do. Suicide is never easy, [and] solving it won’t be easy. But everyone in leadership is focused on it.”

Prompted by the recent deaths of two soldiers at BAMC from alleged causes still being investigated, and other cases involving recovering soldiers, Mullen addressed reporters’ concerns about the issue.

“When we speak to those wounded soldiers, as well as those who are caring for them, it’s clearly a delicate balance here,” the admiral said. “In many cases, it’s very tough and stressful times for individuals, and that’s why coming here to family support is so important. It is important and uplifting. We try to pay a lot of attention to the symptoms that are there, and tragically, sometimes individuals are in a position where the downside occurs and we lose them.”

During the session, another topic addressed by reporters was the concern about operational tempo and whether a larger Army might solve the problem of too little time at their home stations for soldiers between deployments.

“We’re at, in the Army today, 547,000, which is the authorized end-strength increase from about 485,000 when these wars started,” Mullen said. “It’s my view that that’s about right. And we just got to [574,000], and I’d like to settle out on that before I make any decisions on whether we should increase that.”

The topic of operational tempo, Mullen said, is a critical issue for which he believes relief is in sight.

“As I look out within the next 18 to 24 months, I can see a time when units will have more time at home,” he said. “I’ve pushed hard on leadership to make sure that when they are home, they’re home -- so when they’re home during that 12 months, they spend as much time home as possible. In fact, the term I use is ‘home tempo.’

“We need to be paying attention with every soldier, sailor, airman, Marine,” he added, to ensure they have time with their families between deployments.

At the same time,” he added, “these are units that are going to prepare for combat again, and they have to have the right amount of training to do that. So there’s a delicate balance.”

During the chairman’s visit, he told the audience that he and his wife, Deborah, were especially impressed by the spirit and determination not only of the wounded soldiers, but also of the families many of the fallen left behind.

"At the same time,” he added, “these are units that are going to prepare for combat again, and they have to have the right amount of training to do that.

So there’s a delicate balance.” During the chairman’s visit, he told the audience that he and his wife, Deborah, were especially impressed by the spirit and determination not only of the wounded soldiers, but also of the families many of the fallen left behind.

Concerns about wounded warriors who leave the service unable to find work also was a topic of discussion and one that Mullen said needs to be addressed before mistakes of the past are repeated.

“It’s something I’m extremely sensitive and focused on,” he said. “I call myself a ‘Vietnam baby’ – we did not take very good care of [servicemembers] coming out of Vietnam. We have a generation of homeless veterans which we still need to focus on.

In September, Mullen said, he sat down with about 20 homeless Iraq and Afghanistan veterans at a Veterans Affairs hospital in Los Angeles.

"And it’s tragic in what they’ve been through to get there,” he said, “and I want to do all I can to make sure we don’t generate another generation of homeless vets. Our country – financial crisis notwithstanding – is rich enough and has the resources to take care of these young people who go off and fight our wars and do what we ask them to sacrifice so much.”

Mullen said one of the Los Angeles veterans summed it up best: “You know I gave 100 percent. All I’d like is 100 percent back.”

If you've been searching for a way to support our troops easily, now you can. Participate in one of our many projects or register with eMOM and sign up to correspond with service members one-on-one.

Connect with eMail Our Military (eMOM) on twitter at: @MailOurMilitary or follow the blog feed at: @eMOMs. If you're reading this via email or in your feed reader, stop by and add your comments.