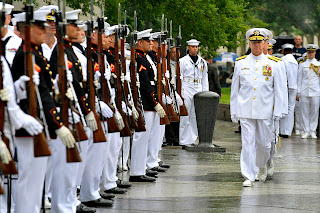 The Battle of Midway, fought June 4-7, 1942, pitted U.S and Japanese naval and air forces in the eastern Pacific Ocean. Midway is part of the Hawaiian island chain; the battle was fought about 1,300 miles northwest of Oahu.

The United States lost the aircraft carrier USS Yorktown and a destroyer at Midway, but the Japanese navy incurred more extensive losses, including the destruction of four aircraft carriers and their aircrews and a cruiser. The battle’s results permanently weakened the Japanese navy; the momentum in the war’s Pacific Theater of operations would now be with the U.S. and allied forces.

Navy Adm. Chester W. Nimitz, who commanded U.S. forces during the Midway battle, described its outcome as “‘a glorious page in our history,’” Navy Adm. Gary Roughead, chief of naval operations, told a group of military veterans gathered at the Navy Memorial.

Midway “was a battle that seized the strategic initiative” in the Pacific, Roughead said, and demonstrated “the importance of naval power in conflict.”

Most of all, the admiral said, Midway “showed the world what an American sailor could do.” The battle is replete with scenes of courage and heroism, he said, from “the stories of those sailors who stayed at their posts until the bitter end to the stories of the sailors who rescued shipmates from the sinking Yorktown.”

The USS Yorktown had been heavily damaged during the Battle of the Coral Sea a month earlier. Shipyard workers at the U.S. naval base at Pearl Harbor had worked around the clock to repair the carrier. Consequently, the Yorktown would participate in the Midway battle, which would turn out to be its last fight.

At Midway, Japanese Adm. Isoroku Yamamoto had planned to draw out and destroy the U.S. Pacific fleet, thus opening the way for a negotiated peace settlement with the United States. Yamamoto realized that Japan couldn’t compete industrially with the United States, and that his forces needed to win a decisive victory early in the war.

However, what Yamamoto didn’t know was that U.S. and British cryptologists had broken the Japanese naval code. Therefore, Nimitz knew, before the battle, the approximate date of the Japanese attack on Midway, as well as the types of ships in Yamamoto’s strike force and its location.

“The code breakers that gave us the location and date of the battle, the shipyard workers, the airmen and Marines who fought from Midway Island and the sailors who fought at sea” all were among the battle’s many heroes, Roughead said. The U.S. victory at Midway came just six months after the successful Dec. 7, 1941, Japanese attack on Pearl Harbor, he pointed out. “And in those months, the carrier Yorktown had been nearly sunk at the Battle of the Coral Sea,” Roughead said. Thanks to the shipbuilders at Pearl Harbor who repaired much of the damaged fleet, he said, the U.S. sailors at Midway “were able to overcome the enemy in battle.”