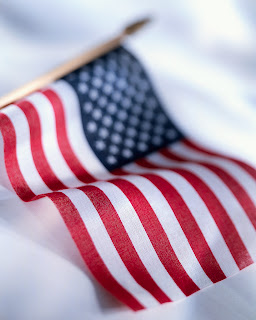 Honoring the American Flag
Condensed from a speech by Leo K. Thorsness, recipient of The Congressional Medal of Honor.

You've probably seen the bumper sticker somewhere along the road. It depicts an American Flag, accompanied by the words "These colors don't run."

I'm always glad to see this, because it reminds me of an incident from my confinement in North Vietnam at the Hao Lo POW Camp, or the "Hanoi Hilton," as it became known.

Then a Major in the U.S. Air Force, I had been captured and imprisoned from 1967-1973. Our treatment had been frequently brutal. After three years, however, the beatings and torture became less frequent.

During the last year, we were allowed outside most days for a couple of minutes to bathe. We showered by drawing water from a concrete tank with a homemade bucket. One day as we all stood by the tank, stripped of our clothes, a young Naval pilot named Mike Christian found the remnants of a handkerchief in a gutter that ran under the prison wall. Mike managed to sneak the grimy rag into our cell and began fashioning it into a flag.

Over time we all loaned him a little soap, and he spent days cleaning the material. We helped by scrounging and stealing bits and pieces of anything he could use. At night, under his mosquito net, Mike worked on the flag. He made red and blue from ground-up roof tiles and tiny amounts of ink and painted the colors onto the cloth with watery rice glue. Using thread from his own blanket and a homemade bamboo needle, he sewed on the stars.

Early in the morning a few days later, when the guards were not alert, he whispered loudly from the back of our cell, "Hey gang, look here." He proudly held up this tattered piece of cloth, waving it as if in a breeze. If you used your imagination, you could tell it was supposed to be an American flag. When he raised that smudgy fabric, we
automatically stood straight and saluted, our chests puffing out, and more than a few eyes had tears.

About once a week the guards would strip us, run us outside and go through our clothing. During one of those shakedowns, they found Mike's flag. We all knew what would happen.

That night they came for him. Night interrogations were always the worst. They opened the cell door and pulled Mike out. We could hear the beginning of the torture before they even had him in the torture cell. They beat him most of the night. About daylight, they pushed what was left of him back through the cell door. He was badly broken; even his voice was gone. Within two weeks, despite the danger, Mike scrounged another piece of cloth and began another flag. The Stars and Stripes, our national symbol, was worth the sacrifice to him.

Now whenever I see the flag, I think of Mike and the morning he first waved that tattered emblem of a nation. It was then, thousands of miles from home in a lonely prison cell, that he showed us what it is to be truly free.