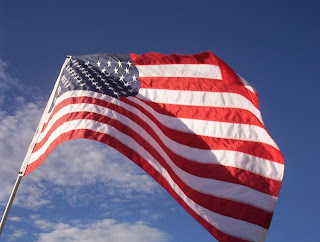 The 50-star flag of the United States was raised for the first time officially at 12:01 am on July 4, 1960, at Fort McHenry National Monument in Baltimore, MD.

The true history of the Stars and Stripes has become so cluttered by myth and tradition that the facts are difficult, and in some cases impossible, to establish. For example, it is not certain who designed the Stars and Stripes, who made the first such flag, or even whether it ever flew in any sea fight or land battle of the American Revolution.

All agree, however, that the Stars and Stripes originated as the result of a resolution offered by the Marine Committee of the Second Continental Congress at Philadelphia and adopted on June 14, 1777. It read:

Resolved: that the flag of the United States be thirteen stripes, alternate red and white; that the union be thirteen stars, white in a blue field, representing a new constellation.

Congress gave no hint as to the designer of the flag, no instructions as to the arrangement of the stars, and no information on its appropriate uses. Historians have been unable to find the original flag law.

The resolution establishing the flag was not even published until Sept. 2, 1777. Despite repeated requests, Washington did not get the flags until 1783, after the American Revolution was over. And there is no certainty that they were the Stars and Stripes.

Many historians consider the first flag of the U.S. to have been the Grand Union (sometimes called Great Union) flag, although the Continental Congress never officially adopted it. This flag was a modification of the British Meteor flag, which had the red cross of St. George and the white cross of St. Andrew combined in the blue canton. For the Grand Union flag, 6 horizontal stripes were imposed on the red field, dividing it into 13 alternating red and white stripes. On Jan. 1, 1776, when the Continental Army came into formal existence, this flag was unfurled on Prospect Hill, Somerville, MA. Washington wrote that “we hoisted the Union Flag in compliment to the United Colonies.”

One of several flags about which controversy has raged for years is at Easton, PA. Containing the devices of the national flag in reversed order, this flag has been in the public library at Easton for more than 150 years. Some contend that this flag was actually the first Stars and Stripes, first displayed on July 8, 1776. This flag has 13 red and white stripes in the canton, 13 white stars centered in a blue field.

A flag was hastily improvised from garments by the defenders of Fort Schuyler at Rome, NY, Aug. 3-22, 1777. Historians believe it was the Grand Union Flag.

At Concord, Apr. 19, 1775, the minutemen from Bedford, MA, are said to have carried a flag having a silver arm with sword on a red field. At Cambridge, MA, the Sons of Liberty used a plain red flag with a green pine tree on it.

In June 1775, Washington went from Philadelphia to Boston to take command of the army, escorted to New York by the Philadelphia Light Horse Troop. It carried a yellow flag that had an elaborate coat of arms—the shield charged with 13 knots, the motto “For These We Strive”—and a canton of 13 blue and silver stripes.

In Feb. 1776, Col. Christopher Gadsden, a member of the Continental Congress, gave the South Carolina Provincial Congress a flag “such as is to be used by the commander-in-chief of the American Navy.” It had a yellow field, with a rattlesnake about to strike and the words “Don't Tread on Me.”

At the Battle of Bennington, Aug. 16, 1777, patriots used a flag of 7 white and 6 red stripes with a blue canton extending down 9 stripes and showing an arch of 11 white stars over the figure 76 and a star in each of the upper corners. The stars are 7-pointed. This flag is preserved in the Historical Museum at Bennington, VT.

At the Battle of Cowpens, Jan. 17, 1781, the 3d Maryland Regiment is said to have carried a flag of 13 red and white stripes, with a blue canton containing 12 stars in a circle around one star.

Who Designed the Flag?

No one knows for certain. Francis Hopkinson, designer of a naval flag, declared he also had designed the flag and in 1781 asked Congress to reimburse him for his services. Congress did not do so. Dumas Malone of Columbia University wrote: “This talented man . . . designed the American flag.”

Who Called the Flag “Old Glory”?

The flag is said to have been named Old Glory by William Driver, a sea captain of Salem, MA. One legend has it that when he raised the flag on his brig, the Charles Doggett, in 1824, he said: “I name thee Old Glory.” But his daughter, who presented the flag to the Smithsonian Institution, said he named it at his 21st birthday celebration on Mar. 17, 1824, when his mother presented the homemade flag to him.

The Betsy Ross Legend. The widely publicized legend that Mrs. Betsy Ross made the first Stars and Stripes in June 1776, at the request of a committee composed of George Washington, Robert Morris, and George Ross, an uncle, was first made public in 1870, by a grandson of Mrs. Ross. Historians have been unable to find a historical record of such a meeting or committee.

The flag of 1777 was used until 1795. Then, on the admission of Vermont and Kentucky to the Union, Congress passed and Pres. Washington signed an act that after May 1, 1795, the flag should have 15 stripes, alternating red and white, and 15 white stars on a blue field.

When new states were admitted, it became evident that the flag would become burdened with stripes. Congress thereupon ordered that after July 4, 1818, the flag should have 13 stripes, symbolizing the 13 original states; that the union have 20 stars, and that whenever a new state was admitted a new star should be added on the July 4 following admission.

No law designates the permanent arrangement of the stars. However, since 1912, when a new state has been admitted, the new design has been announced by executive order. No star is specifically identified with any state.

An article from The World Almanac and Book of Facts. © 2006

You're a Grand Old Flag

You're a grand old flag,
You're a high flying flag
And forever in peace may you wave.
You're the emblem of The land I love.
The home of the free and the brave.
Ev'ry heart beats true
'neath the Red, White and Blue,
Where there's never a boast or brag.
Should auld acquaintance be forgot,
Keep your eye on the grand old flag.