Happy Ending for Veteran Whose Flag Was Torched

Earlier today we rallied our online community along with the help of @MichelleMalkin, @DeltaWhiskey1, @Military_Mom and so many others when we were tipped off by @BriskUSMC that Dallas Veteran, Ed Jordan had both his Marine Corps and American flags burned outside his home.

The story, which originally ran on NBC5 in Dallas/Ft. Worth made it's way across the internet and spread quickly across twitter. People wanted to take action to help this 70 year old veteran get new flags. 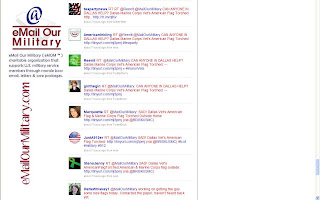 Shellie Ross (@Military_Mom) didn't waste any time. She called a local flag company and ordered two flags for Ed and then contacted NBC5 to let them know. @DeltaWhiskey1 got on the phone as well to a different flag company* to get the job done for Mr. Jordan. The

Behind the scenes here at eMOM we contacted NBC5 reporter Ellen Goldberg who ran the story. Though we didn't hear back from Ms. Goldberg, we were able to find Mr. Jordan and when we spoke with him to tell him about the outpouring of support he'd been receiving across the internet - he was amazed.

Mr. Jordan, who spent three years in the Marines and six years in the Marine Corps Reserves, told us that a fellow veteran, one town over, came to his home and brought him an American flag that flew over Mosul. What an honorable replacement. He plans to display it proudly.

We let Mr. Jordan know that we wanted him to have a back-up plan. @AmericanFlag, The United States Flag Store, (http://www.united-states-flag.com/ has offered to send him replacement flags. He was so happy to know that his beloved Marine Corps flag would be replaced as well.

This story has a happy ending thanks to great folks like you getting involved when one of our own is in need.

If you'd like to send cards to Ed Jordan voicing your support, please send them to:

Thanks for all you do!

*Note: @DeltaWhiskey1 contacted "The Flag Company" in Dallas who allegedly was unwilling to donate a flag or even take donations from citizens to help this veteran out.