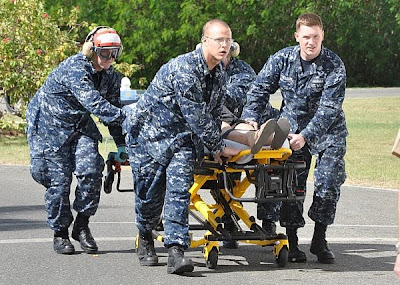 WASHINGTON (NNS) -- President Barack Obama said Jan. 14 he's made helping Haiti in the wake of a crippling earthquake the top priority of every U.S. government agency.

Speaking from the White House, Obama called the quake an unimaginable tragedy and said the United States has launched "a swift, coordinated and aggressive effort" to help.

Flanked by his national security team, the president said the U.S. response will require help from every government agency and the compassion of Americans.

"I've made it clear [to Cabinet officers and government agency heads] that Haiti must be a top priority for their departments and agencies right now," Obama said. "This is one of those moments that call out for American leadership."

American service members are deploying to the area, the president said.

"Several Coast Guard cutters are already there, providing everything from basic services like water to vital technical support for this massive logistical operation," he said. "Elements of the Army's 82nd Airborne Division will arrive today."

The first waves of the U.S. rescue and relief effort are on the ground and at work, the president said.

"An airlift has been set up to deliver high-priority items like water and medicine," Obama said.

The United States is working closely with the Haitian government, the United Nations and relief organizations to deliver supplies, but it will take some time for supplies, personnel and equipment to arrive in Haiti, he added.

"Right now in Haiti, roads are impassible, the main port is damaged and communications are just beginning to come online, and aftershocks continue," he said. "None of this will seem quick enough, … but it's important that everyone in Haiti understand that one of the largest relief efforts in our recent history is moving toward Haiti."

The earthquake struck the evening of Jan. 12 near the capital of Port-au-Prince. The magnitude 7.0 quake flattened many areas of the city. Port-au-Prince is one of the largest cities in the Caribbean, and Haitian officials fear that at least 100,000 people may be dead.

American assets are pouring into the country. U.S. search and rescue teams have arrived, and medical personnel and relief supplies are arriving.

In the best of times, Haiti is the poorest country in the Western Hemisphere. The country suffers from extreme poverty, deforestation, a lack of infrastructure and political instability.

Obama pledged not to forsake the people of Haiti in their hour of need.

"American stands with you. The world stands with you," he said. "We know you are a strong and resilient people. You have endured a history of slavery and struggle and natural disaster and recovery. Through it all, your spirit has been unbroken and your faith unwavering. Today, you must know that help is arriving and much more help is on the way."