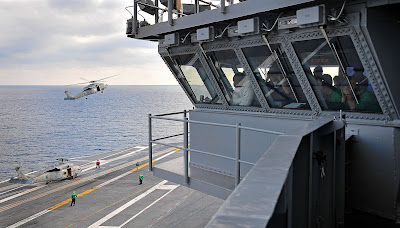 Carl Vinson received orders from U.S. Southern Command to deliver assistance to the Caribbean nation following a 7.3 magnitude earthquake which caused catastrophic damage within the capital city Jan. 12. The aircraft carrier's speed, flexibility and sustainability make it an ideal platform to carry out relief operations.

"Our initial focus is to concentrate on saving lives while providing first responder support to the people of Haiti. Our assistance here reflects our nation's compassion and commitment to those impacted by this tragedy," said Rear. Adm. Ted Branch, commander of the Carl Vinson Carrier Strike Group and the U.S. Navy's sea-based humanitarian support mission of Haiti.

The carrier arrived on station with a robust airlift capability, picking up extra helicopters while in transit that will will prove essential during the mission.

Carl Vinson commanding officer Capt. Bruce H. Lindsey said, "When tasked to support humanitarian assistance and disaster relief operations in Haiti, we immediately headed to Mayport, Fla., at more than 30 knots and loaded 19 helicopters, personnel and support equipment from five different East Coast Navy squadrons in less than eight hours. There is no other platform that can do all of that so quickly."

U.S. Southern Command is well-versed in providing humanitarian assistance to the region. Since 2005, the command has led U.S. military support to 14 major relief missions, including assistance to Haiti in September 2008. During that mission, U.S. military forces airlifted 3.3 million pounds of aid to communities that were devastated by a succession of major storms.

Just saw some of the crew being interviewed on NBC News as they were working with survivors - THEY ARE MAKING US PROUD!