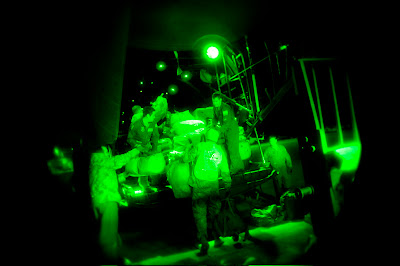 WASHINGTON, Jan. 14, 2010 – With Defense Secretary Robert M. Gates’ committing all available military resources to the Haiti relief effort, U.S. Southern Command is “working feverishly and aggressively ” to get them there as quickly as possible, its commander said today. Story

WASHINGTON, Jan. 14, 2010 - U.S. Air Force special force operators in Haiti have rescued seven survivors of the massive Jan. 12 earthquake that continues to wreak havoc on the country in its wake, according to Air Force officials. Story

WASHINGTON, Jan. 14, 2010 – Haitian and U.S. officials are working together to meet the challenges of the Port-au-Prince earthquake, State Department officials said. Story

WASHINGTON, Jan. 14, 2010 – An initial contingent of 100 82nd Airborne Division troops deployed to Haiti around noon today, and another 800 soldiers will follow tomorrow to support disaster relief and humanitarian support. Story

WASHINGTON, Jan. 14, 2010 – The Defense Logistics Agency is preparing to provide humanitarian relief in response to the devastating earthquake that shook Haiti Jan. 12. Story

WASHINGTON, Jan. 13, 2010 – The aircraft carrier USS Carl Vinson is headed toward earthquake-devastated Haiti and is scheduled to arrive tomorrow to provide airlift support for the disaster-response mission, the commander of U.S. Southern Command reported today. Story

WASHINGTON, Jan. 13, 2010 – Defense Department officials are coordinating with their State Department counterparts to provide life-saving assistance in Haiti as quickly as possible after a devastating earthquake struck near the capital of Port-au-Prince yesterday afternoon. Story