What Memorial Day Means To Me

What Memorial Day Means To Me
By Amanda Schmutz 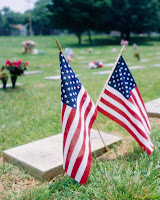 Ask most people what Memorial Day means to them and the usual responses will involve the beginning of summer, picnics and family gatherings. And while all of those things are true, those responses drive home the point that we’ve lost sight of the bigger picture. Memorial Day is a day to honor our fallen military men and women, our fallen heroes. It’s a day to say “Thank You” to those who continue the fight. It’s not about politics or religion; it’s about being grateful for the freedoms granted to us and recognizing that those freedoms are not free.

What saddens me about Memorial Day is not what it signifies, because those losses are bittersweet. On the one hand, those men and women who’ve sacrificed their lives have left behind families that need them; they’ve left holes in the fabric of someone’s life. On the other, they died doing what so many of us are afraid to do – they died standing up for our country and the rights granted to us by that country. No, what saddens me most about Memorial Day is that when it’s over, the flags that so proudly waved on this last Monday in May come down. The parades end. The general populace goes back to work on Tuesday grumbling about needing “just one more day” off. Memorial Day should live in our hearts every day. We shouldn’t need a special day on the calendar and time off from work to remember that there are hundreds of thousands of men and women putting their lives on the line at any given time, protecting everything our country stands for. They put their lives on the line for people like you and me, for our mothers and fathers, siblings and spouses, for our children. They do so without asking for anything in return. Many of them are on their fourth and fifth deployments. I’ve heard comments like “well they signed up for it.” Yes, they did, and that’s the point. They signed up for it knowing war was a possibility, some even signed up with the express purpose of going to war beside their brothers in arms. And if they’re on their fourth or fifth tour, they’ve had to make the choice to re-up, to sign themselves up for yet another round of deployments. They could’ve made the choice to say “no more”, but who would go in their place? Would you? Would you send your children instead? Your spouse? Your siblings? If they don’t go, who will?

So I think we should have Memorial Day Resolutions, instead of New Years’ Resolutions. Resolve to thank that soldier you see in the airport the next time you’re flying home to see grandma and grandpa. Resolve to remember that that soldier is likely headed back into a war zone. Resolve to ask any member of the armed forces if there is anything you can do for them, in exchange for the sacrifices they are making for you. Resolve to find a troop support organization and find a way to get involved. Make a donation so the organization can continue its support efforts; write a letter or send a care package to a soldier, sailor, Marine, or airman who isn’t receiving anything from home; volunteer to work at a USO center. There are so many ways to get involved, it takes very little but makes a huge difference. Resolve to keep Memorial Day alive in your heart, and in the hearts of your family and friends, not just on this special day, but every day.