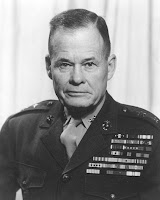 Fuller was promoted to brigadier general in 1951 and to lieutenant general upon retirement in 1955. During the 1950s, the colorful and outspoken Puller gained attention as a champion of tough, realistic training; a defender of the basic soundness of American youth; and a critic of higher leadership. His legend continued to grow; photographs of his bulldog visage hung in homes and service clubs across the country as a symbol of invincible heroism and fidelity to traditional military standards.
Among Puller’s most famous quips:

“We’re surrounded. That simplifies our problem of getting to these people and
killing them.”

“Remember, you are the 1st Marines! Not all the Communists in Hell can
overrun you!”

“Where do you put the bayonet?” (upon seeing a flamethrower for the first
time)