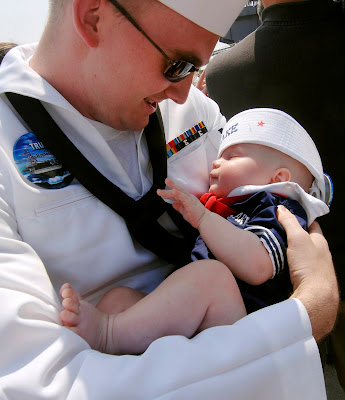 Aviation Boatswain's Mate (Handling) 3rd Class Nicholas Beyer holds his 4-month-old son for the first time during homecoming celebrations for the crew of the Nimitz-class aircraft carrier USS Harry S. Truman (CVN 75) and embarked Carrier Air Wing (CVW) 3 at Naval Station Norfolk. Beyer and several other new fathers were among the first allowed to walk off the ship in order to meet and hold the children whose births they were forced to miss due to the deployment. Nearly 7,500 Sailors have returned to their homeports from a scheduled deployment with the Harry S. Truman Carrier Strike Group (CSG) supporting maritime security operations in the 5th and 6th Fleet areas of responsibility.

Homecomings are the best! That photo is adorable!!!