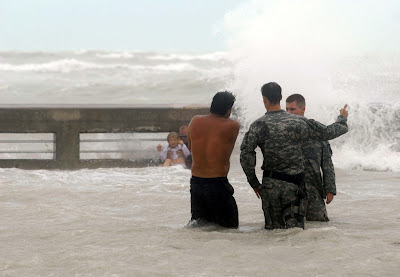 Soldiers from the Florida Army National Guard's 3rd Battalion, 20th Special Forces Group, talk to a resident swimming in the flooded section of the White Street Fishing Pier in Key West, Fla., Sept. 9, 2008. People braved the dangerous conditions at the end of the pier as storm surge from Hurricane Ike crashed over the barriers and flooded the pier. Guardsmen and Key West police officers warned the swimmers of the unsafe conditions, and soon the pier was closed to visitors by city officials. In the background a man holds a child in the dangerous surf. Photo by Tech. Sgt. Thomas Kielbasa. (Courtesy of Soldier Media Center)