Hurricane Hunters of the 403rd Wing at Keesler Air Force Base 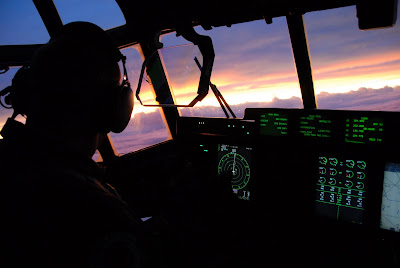 Lt. Col. Mark Carter looks at the sunset after flying nine hours on a Hurricane Ike mission on board a WC-130J Hercules Sept. 10 over the Gulf of Mexico. The Air Force Reserve Hurricane Hunters of the 403rd Wing at Keesler Air Force Base, Miss, fly 24-hours-a-day, collecting data inside the heart of Hurricane Ike. The data collected by the Hurricane Hunters improve the National Hurricane Center forecast by 30 percent. Colonel Carter is a pilot with the 403rd Wing. (U.S. Air Force photo/Maj. Chad E. Gibson)