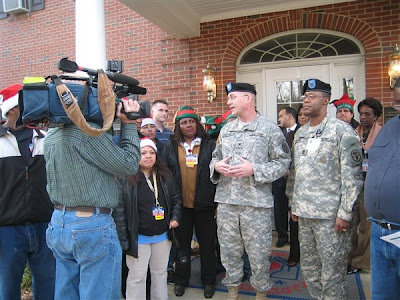 Wal-Mart associates “decked the halls” for the two Fisher Houses and also presented a check for $280,000 at the Walter Reed location.

“Decorating the Fisher Houses was important for a number of reasons,” said E.R. Anderson, Wal-Mart regional media director. “First, Wal-Mart is committed to giving back to the communities where we operate. Second, we want to say ‘thank you’ to our servicemen and women for all they do for us. We also want to appreciate their families.”

Nationally, Wal-Mart Stores is donating $250,000 to the Fisher House Foundation -- $100,000 to support the purchase of gifts cards for unmet needs of families spending the holidays in a Fisher House, $95,000 in direct support to the houses, and $55,000 for fees associated with Hero Miles tickets to unite families during the holidays.

Fisher Houses are built on the grounds of major military and Veterans Affairs medical centers. They provide free lodging for military families to be close to loved ones during hospitalization.

James D. Weiskopf, executive vice president of communications at the Fisher House Foundation, said he is proud of the partnership with the world’s largest retailer.

“Community involvement and support is essential to the program,” Weiskopf said. “Supporting America's servicemen and women, and most especially those wounded or injured, is a duty for all Americans. Wal-Mart is a very patriotic, community-spirited corporation, and we are proud of our association.”

* You can still help support our troops this holiday season. Membership is not required to participate but we'd love it if you took a minute to register with eMOM to correspond with service members one-on-one. *