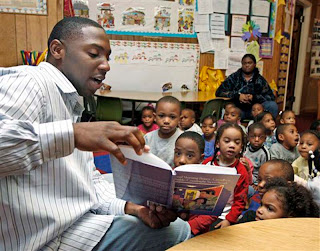 PETERSBURG, Va. — Korey Outerbridge was in Iraq when the idea came to him: He needed to write a children’s book.

“We had phone tents when we deployed, for soldiers to call back to the states,” Outerbridge said.

Crossword-puzzle and race-car magazines lay scattered about the phone tents. Soldiers would thumb through them while they waited to contact to their families, the 29-year-old Newport News native recalled.

“I got the idea: Why not put something in that they could share with their youngsters back home?” he said.

He wanted the book to be comforting and inspiring, so that members of the armed forces could read it to their children and help their young ones understand why parents in the military sometimes have to leave for long and trying periods.

Outerbridge recently read “Good Morning, Honey” to 3- and 4-year-olds at the ABC Learning Center in Petersburg.

“We have quite a few kids who have military parents here in the center,” said Danielle Lucas, the school’s assistant director. “They identified with the soldiers in the book. They understand when he talks about being deployed. It’s about them.”

Written in his off-duty time, bachelor Outerbridge’s little book tells the story of how a serviceman and his young daughter, each in their own way, deal with being separated during the man’s deployment to Iraq.

The book, illustrated by Newport News artist Stanley B. Washington, also demonstrates the soldier’s love for his daughter, his commitment to duty and the joy of reunion with his daughter.

The story takes the family through the homey events of daily life: waking up, cleaning up, making breakfast, buckling up for the drive to school, learning to ride a bicycle, bandaging a scraped knee.

When his orders come to deploy, he shows his daughter where Iraq is on a globe and explains how long he’s going to be gone. “Even though you won’t be there with me, you’ll always be in my heart,” the father tells his child.

Outerbridge, a veteran of combat in Iraq, wanted children to see how soldiers fight for freedom and still stay bonded with their children.

“When Daddy was in Iraq, he did all that he could to keep Mommy and I safe,” the daughter says in “Good Morning, Honey.”

And when the father comes home, “I hugged him like I never hugged him before,” she says. “Then he looked me in the eye and said, ‘Daddy loves you and Daddy missed you.’ ”

Outerbridge enlisted in the Army in June 1997, a week after he graduated from high school. He trained as a supply specialist at Fort Lee and went on to earn a chestful of demanding military qualification badges: parachutist, air-assault soldier and parachute rigger.

He’s served in combat in Iraq — twice — and deployed to the Balkans.

Outerbridge rose quickly through the ranks and then was selected for Officer Candidate School. Now he’s on detached duty, completing his degree in business at Virginia State University before he returns to a regular Army unit.

His own childhood was not as idyllic as the family life described in his self-published book.

His father often was absent, and Outerbridge and his five siblings were raised largely by his mother, Catherine S. Slaughter, who works as a janitor for the Newport News public schools.

“She’s definitely my biggest inspiration,” Outerbridge said. “She overcame. She kept a roof over our heads.”

And, using the local newspaper, his mother taught him how to read before he started school, a skill that has served him well.

“I’ve always been interested in writing,” he said. “I write poetry, children stories. I have maybe four children’s stories complete.

“I like to write uplifting, motivating stories that send positive messages.”

So, how did it go when he read the book to the kids at the preschool center?

If you're reading this via email or in your feed reader, be sure to stop by and tell us your thoughts.