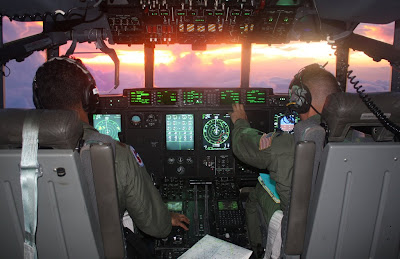 Maj. J.D. Haig (left) and Lt. Col. Troy Anderson, 53rd Weather Reconnaissance Squadron pilots, patrol then Tropical Storm Gustav during a mission out of Homestead Air Reserve Base, Fla., on Aug. 27. The Hurricane Hunters are the only operational unit in the world flying weather reconnaissance on a routine basis. They provide surveillance of tropical storms and hurricanes in the Atlantic, Caribbean, Gulf of Mexico and Central Pacific for the National Hurricane Center.

I love seeing our locals on the scene!